New Chairman at the Helm 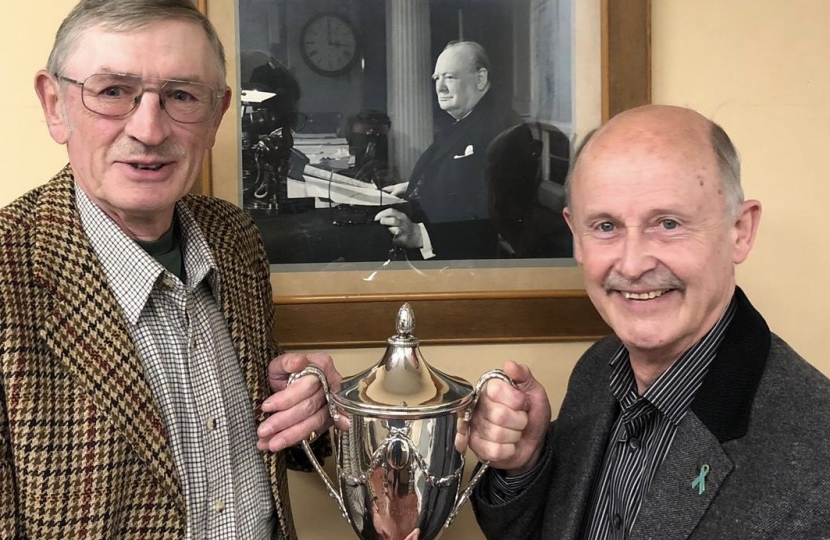 At the recent Annual General Meeting of the Grantham and Stamford Conservative Association outgoing Chairman Philip Sagar was presented with the 'Bill Todd Memorial Challenge Cup’.

The cup is awarded annually to a member of the Association who is considered to have worked extremely hard in the preceding year for the Association.

Philip having served the maximum four years allowed under the party rules is standing down but has been elected a Vice President of the Association, replacing Philip through a ballot of the members is Martin Trollope-Bellew, who previously served for many years as a Lincolnshire County Councillor and Chairman of the Council before standing down at the last County elections 2 years ago.

Martin said ‘The association owes a debt of gratitude to Philip for the way he has conducted himself over the last year in representing accurately the views of the Association and its officers in the national and local media with regard to the actions and statements of our MP Nick Boles. This cannot have been an easy period for him, not least because of his personal circumstances in regard to supporting his wife Jane's ongoing 4 and a half year journey with Ovarian Cancer. Sadly as we know Jane passed away on the weekend Nick was staging his resignation from the Association by way of a Sunday Times article and that must have been particularly hurtful for him.'

Philip added 'the last few months have been personally very difficult for me and my family but Jane was adamant that I should not shirk my responsibilities to the Association and she encouraged me to take every opportunity to try and correct the Nick Boles victim narrative that was being peddled by much of the national media. She was an amazing woman and I dedicate this trophy to her memory for without her I could never have achieved what I have throughout my career. We were a team and I miss her terribly.'

Philip is campaigning to raise awareness of the importance of having Ovarian cysts taken more seriously by the medical profession and for woman to seek a second opinion when being told cysts are commonplace.

Applications are now open for anyone interested in standing as a candidate for Lincolnshire County Council.

Simply download the form below and send back to the office.

If you have any questions or queries, then please don't hesitate to contact the office.